The Winchester House in San Jose was built by Sarah Winchester, heiress to the Winchester (“The Gun That Won the West”) Repeating Arms Company fortune. 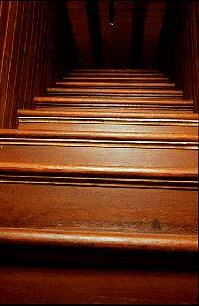 After her daughter and husband died, she came to believe that the family was haunted by the ghosts of people killed by Winchester rifles.

She consulted a medium in Boston, who told her to move west and build a mansion that would never be finished.

As long as she kept building, she would never die.

(Whether or not you believe in spiritualists, you’ve got to give high marks here for originality.)

In 1884, Mrs. Winchester moved to San Jose, which was then a rural community, and bought an eight-room farmhouse. She kept builders employed at the house 24 hours a day for the next 38 years, until her death in 1922.

By that time, the house was four stories high (it had been seven stories before the 1906 San Francisco earthquake) and had 160 rooms.

Of course there was no master plan for all this construction. Mrs. Winchester had a seance room in which she consulted “good spirits” for architectural advice.

Mostly she was building for the sake of building, per the medium’s advice. As a result, the house is full of structural oddities: staircases that lead nowhere, doors that open to walls, fireplaces without chimneys . . . a classic case of ineffective change management.

I originally developed the idea of a Winchester House Effect in software in collaboration, I guess you could say, with a former colleague of mine — shortly before he went insane. 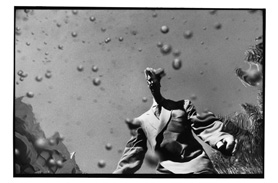 He was a project manager on a project that had fallen behind schedule, so he decided to jump in and do some coding in an effort to make up for lost time.

He unwittingly wound up trying to code the most complex program in the system, the one the rest of us had been trying to avoid.

In retrospect, I wish we’d tipped him off to maybe start with something a little simpler, but there was really no way to foresee the effect the program would have on him.

His behavior became increasingly strange and paranoid. He wound up leaving the project suddenly, although not before finishing the fateful program.

The code was bizarre; the program flow made no sense. I remember thinking at the time, “He’s created the Winchester House of software.”

His subsequent hospitalization was (we were told) for high blood pressure, and not — not — the result of a nervous breakdown.

The program was unmaintainable and was eventually rewritten from scratch.

2 comments for “The Winchester House Effect”

Life is not a spectacle or a feast; it is a predicament.