In high school, I was in the school orchestra. There were no auditions; it was just a class you could sign up for, independent of whether or not you had any musical ability. 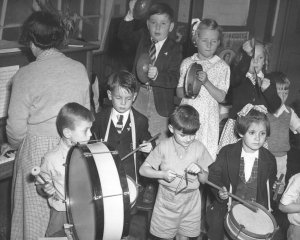 And when a student with no musical ability signed up for the orchestra, what transpired was something like this:

Director: What instrument do you play?
Student: I don’t really play an instrument.
Director: You’re in the percussion section.

There were three or four of us in the percussion section who could actually read music and play it, so it was kind of depressing that it was mainly a backwater where musical illiterates were sent to bang on cowbells . . .

I recollected my days as a high-school percussionist today when one of our tech leads — tech leads — pulled up some javadocs and announced that a method we were using was “depreciated.”

Now if this cretin is not familiar with the term “deprecated” — which he certainly should be — but since he isn’t, you’d think he might at least be capable of reading or sounding out his own language.

But no such luck there either.

Ever since the dot-com boom wiped out the hiring standards for the software business, this is what’s become of a once-noble profession.