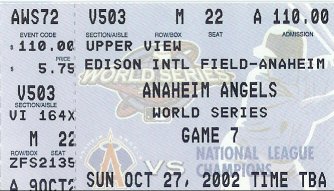 My son is 9, a little older than I was when my dad took me to my first Angels game somewhere around 1966.

Going into Game 6, the Giants were 8-0 with Baker’s kid in the dugout. Now they’re 8-2. Angels players also had their family members on the field . . . after winning Game 7.

Giants pitcher Livan Hernandez came into the World Series with a 6-0 record in postseason play and announced, “I never lose in October.” After losing Game 3 and Game 7, he’s now 6-2.

It used to be pretty common for an athlete to spend his entire career with one team. Now it’s very unusual, especially for top players like Glaus, Anderson, Erstad, Salmon and Percival.

By contrast, almost none of the Giants starters or pitchers are homegrown products, the exceptions being Rich Aurelia, Russ Ortiz, Chad Zerbe and Aaron Fultz.

← Going to the World Series
Overheard →