The number of students majoring in computer science is falling, even at the elite universities. So [Bill] Gates went stumping at the University of Illinois at Urbana-Champaign, Carnegie Mellon, Cornell, M.I.T. and Harvard, telling students that they could still make a good living in America, even as the nation’s industry is sending some jobs, like software programming, abroad.

— The New York Times, “Microsoft, Amid Dwindling Interest, Talks Up Computing as a Career” 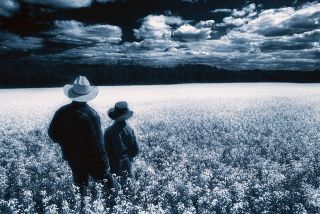 My brother is a doctor.

He doesn’t encourage his kids to go into medicine though, because he’s incredibly frustrated by the fact that you go to school for 20 years to learn something, only to have clerks from insurance companies decide if a procedure you’ve recommended is or is not “medically necessary.”

I’ve worked in computing for 20 years.

I don’t push my kid to get into it because during that time, it’s become less and less like a professional business and more like a big class project, full of people who have no aptitude, no education and no role models.

A friend of mine teaches a computer science class at a local community college. He loves it.

I don’t think I could bring myself to stand up in front of a group of young people and encourage them to be programmers. I’d probably wind up yelling at them to go be flight attendants or meeting planners and stop wasting their time.

Where are you going to go as a programmer to do interesting, influential work with bright, educated people? The list of possibilities is very short.

Microsoft is on the list — but the fact that Bill Gates is out recruiting at Illinois, Carnegie Mellon, Cornell, M.I.T. and Harvard while you’re sitting here in a community college class suggests that a Microsoft career may not be in the cards for you.

Life is not a spectacle or a feast; it is a predicament.