In other sports news — “other” meaning something besides steroids, blood doping, dog fighting and point shaving — Dara Torres has won her 14th and 15th national swimming titles at the U.S. Nationals currently going on in Indianapolis.

Why is that worth mentioning? 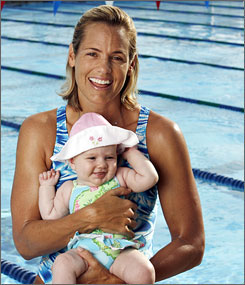 Well, swimming is a young person’s sport and Torres is 40 years old. She won her first national title 25 years ago in 1982. She won Olympic medals in 1984 in Los Angeles, 1988 in Seoul and 1992 in Barcelona, then retired from competitive swimming at age 25.

Four days ago, at age 40, and just 15 months after giving birth to her first child, she won gold in the 100m freestyle at the U.S. Nationals in Indianapolis, her 14th national title.

“I just got in shape swimming with my daughter and I started swimming a couple of meets and I swam real fast,” she said. “A lot of master swimmers were encouraging me to swim, so I just decided to get back into it.”

Last night, she won her 15th title, swimming the 50m freestyle in 24.53 seconds, breaking her own American record of 24.63 set in the 2000 Sydney Olympics. Lara Jackson placed second at 25.27, close to a full second behind, which is an absolute blowout in a 50m race.

Her goal is to qualify for the 2008 Olympics in Beijing, where she would be the oldest female Olympic swimmer ever at age 41.

I love this story, although it’s getting little to no play in any of the sports media I follow.

← Do You Remember Your First Movie?
Life in the OC Photos →

To become different from what we are, we must have some awareness of what we are.