Of the four high schools here in Irvine, only one — Irvine High — has a stadium on campus. There’s a movement afoot, led by local attorney and parent Emmett Raitt, to build a second stadium. 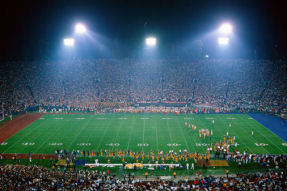 Here’s an excerpt from Emmett’s email suggesting that parents write to the school board about this matter:

The reasons a second stadium are needed include the elimination of Thursday night games, which lowers student attendance at games; it will ease the overcrowding of the Irvine Stadium facility (and particularly the snack bar, a personal favorite of mine); and it will allow all schools to use District facilities for their graduations, which they do not now do.

Hmmm . . . I can’t see how increasing student attendance is going to ease overcrowding, nor do I think the fact that some local fatso thinks there are too many people ahead of him in the snack bar line justifies spending $10 million on a new stadium.

Now here’s the follow-up email that came out from Rick Curtis, the varsity football coach at my son’s school, Northwood High:

We need to get to the school board meetings and we need to get organized. . . . These are the people that we are competing against and we are way behind in providing state of the art facilities for our student athletes.

All the districts that he mentions in the email are good academically, but they’re not in the same class as the Irvine district, which is the crème de la crème.

So here’s a no-cost solution:

Memories warm you up from the inside. But they also tear you apart.