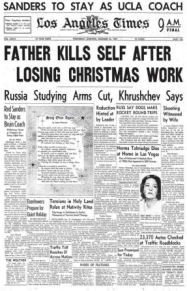 According to the Los Angeles Times:

Where there is no vision, the people perish.