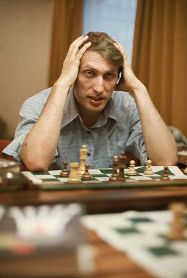 Americans like a winner. If you lose, you’re nothing. I’m going to win, though. It’s good for the match that Spassky has a plus score against me. We’ve met five times. He’s won three times and we’ve drawn twice. But I’m a stronger player and a long match favors me.

Bobby Fischer died last week in Reykjavik, Iceland, the site of his greatest triumph — the 1972 World Chess Championship. He was 64 years old, one year for each square on a chessboard.

In the middle of the Cold War, he beat the Soviets at their own game. He became as famous as a rock star while playing a game that absolutely no one in this country cares about. I’d bet a dollar to a doughnut that most Americans can’t name one other chess grandmaster, living or dead, such is our apathy for chess and the people who play it — but by god, we do love a winner!