At the Lakers Game

My son and I went to the Lakers game last night, a pre-season game against Utah . . .

As we were walking in, he pointed out an Asian girl with a spiky-haired Asian guy wearing an Olympics jersey and said, “That guy with the Olympic jersey pulled a hotter Asian woman than you.”

Pretty good game! The starters played more than I thought they would.

Andrew Bynum is back. He looked good!

Jerry Buss was there. He looked terrible. Thirty minutes before the game, a guy rolled him out in a wheelchair to the end of the court. It took him several minutes to hobble from there to his courtside seat. My son said he had a leg injury. I thought he was just too old.

The girl sitting next to him — his date or his great-granddaughter, I’m not sure which — looked really good. 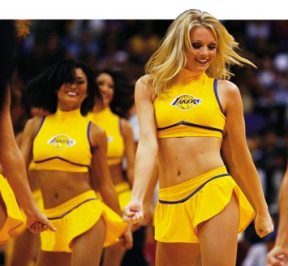 The Laker Girls totally set the bar for whatever you call these kinds of groups — cheerleaders? Dance teams?

I realized that what’s missing from my workplace is hot girls in extremely short skirts who jump around and cheer whenever something noteworthy happens.

We check in a bug fix? Gooooo team!

Then at halftime — or “lunch” as we call it — they’d change into tight pants and belly shirts and jump around in the new outfits all afternoon.

On the drive home, my wife called my son’s cell phone. The conversation was focused on exactly where we were and how long it would take us to get home.

“Why does she care about that?” I asked.

“She’s probably up to something and wants to make sure she stops doing it before we get there.”