It’s sad to see Clint Eastwood get old but somebody’s got to do it.

It seemed to me as far back as Unforgiven and In the Line of Fire that while other actors were trying to stay artificially young forever, no one else was putting on screen an honest portrayal of what it’s like to be an old man, what it’s like to feel yourself diminished. 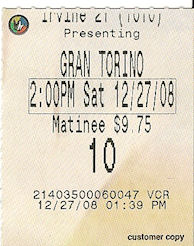 I was trying to think of another leading actor who’s doing roles where the central fact about the character is that he’s gotten old and tired and scared . . .

Al Pacino? Dustin Hoffman? No. Same roles, plus they’re both around 70 years old with absurd fake pompadours piled on top of their heads. In order to do these roles, you can’t be someone with cosmetic surgery and fake hair who has to use makeup effects to look his own age.

I once read where Michael Douglas is proud of the fact that he has taken on “challenging” roles. You want a challenge? Knock it off with the facelifts and the young wife and show people what it’s really like to get old.

They can’t even admit it to themselves, these guys.

Sylvester Stallone? He’s only 60 but you can tell already that he’s not going to do it. He’s still making Rocky and Rambo movies, for god’s sake.

Rating: Four stars (out of five). I added one star for Clint Eastwood being the only man brave enough to get old in front of a camera.