Irvine schools are on spring break this week. I took a day off for father-son activities with my boy, age 15.

As we were driving back from lunch at Wingstop, I said, “You want to see Monsters vs. Aliens in 3-D IMAX?” 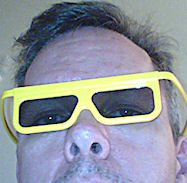 “Not particularly,” he said.

I’d already decided that I did want to see it so I got off at the Irvine Spectrum exit.

“I guess this means we’re going to see it,” he said.

“Oh shut up, Sophocles. It’s a movie for two-year-olds.”

“I’ll be the combined age of everyone else in the theater.”

We got there a little early so we bought the movie tickets and walked around the Spectrum for a while. I bought a Tommy Bahama shirt and the boy got some red sneakers at Vans.

I have to admit that the movie didn’t really live up to my expectations, but the 3-D IMAX was good and I liked this line from BOB, the monster with no brain, when the battle against the aliens looks hopeless:

“Gentlemen, I may not have a brain — but I have an idea!”

In the evening, the boy had a high school roller hockey game and his mom and I watched him. It was a good day . . .

We come to work, have lunch, and go home. We goose-step in and goose-step out, change our partners and wander all about, sashay around for a pat on the head, and promenade home till we all drop dead.