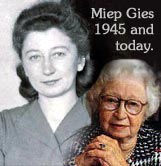 AMSTERDAM – Miep Gies, the office secretary who defied the Nazi occupiers to hide Anne Frank and her family for two years and saved the teenager’s diary, has died, the Anne Frank Museum said Tuesday. She was 100.

“I don’t want to be considered a hero,” she said in a 1997 online chat with schoolchildren.

“Imagine young people would grow up with the feeling that you have to be a hero to do your human duty. I am afraid nobody would ever help other people, because who is a hero? I was not. I was just an ordinary housewife and secretary.”

I was tired of grief. No longer fixated by the unresolved, I wanted to let it go, let it all go. Would the world end if I left the past behind?

— Antonella Gambotto, The Pure Weight of the Heart