The Eternal Footman Held My Coat and Snickered 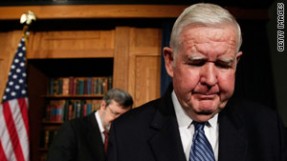 Rep. John Murtha of Pennsylvania, a longtime fixture on the House subcommittee that oversees Pentagon spending, died after complications from gallbladder surgery, according to his office. He was 77.

OMG I HAD THAT SAME OPERATION I COULD HAVE DIED!!!

On a lighter note, how ironic is it that the president loses a pro-ObamaCare vote due to medical error in a government-run hospital?