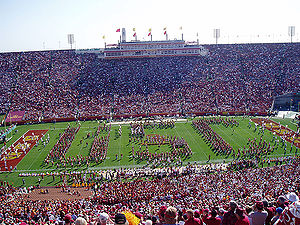 All these years later, my son went to USC this morning, my alma mater, for a college interview, wearing a red shirt and his lucky tie bar.

Around noon, he texted me: “Sitting right next to jurrell casey and nick perry in the student center. No big deal”

Jurrell Casey is one of my favorite football players, not just because his last name is the same as my son’s first name. Every time we watch a game and he makes a good play, I yell “CASEY!”

There are two major universities in Los Angeles but at the other one, UCLA, no one will talk to you. Literally. They won’t talk to you.

It’s a government-run institution. Imagine the DMV operating a college. Or the IRS. Or the Post Office. UCLA is actually worse than any of them.

At those other places, eventually you’ll get to talk to someone. You’ll take a number and wait, and when you do talk to someone, they’ll be glum and uninspired, but at UCLA, they just will not talk to you.

← A Day in the Internet
The Trashmen: Surfin’ Bird – Amsterdam →