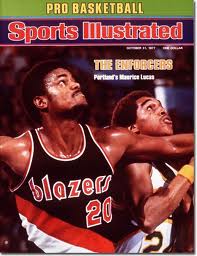 PORTLAND, Ore. — Maurice Lucas, the fierce power forward known as “The Enforcer” who helped lead the Portland Trail Blazers to the 1977 NBA title, has died after a long fight with bladder cancer. He was 58.

I enjoyed watching this guy play.

Did you know that former Blazer teammate Bill Walton named his son Luke after Lucas?