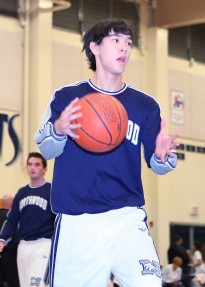 For most of the season, my boy’s been one of the kids who only plays in the last few minutes of blowouts.

He’d like to play more but he’s never been on a basketball team before.

To me, the fact that he tried out at all is a win, making the team is icing on the cake, and whatever happens after that is up to him and the coach.

He told me he’s had some of his best practices lately, and in last night’s game, he got in for a few minutes in the third quarter and then played the whole fourth quarter.

“I’ve elevated myself from scrub to super scrub,” he said.

← Warming Up is Horseshit
Hamlet Backwards →