My Kid is Going to Cal 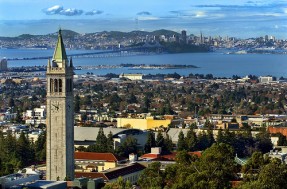 I always kind of assumed that the boy would follow in his pappy’s footsteps at USC, but he just sent in his intent to register at Cal, thus ending (effectively) a journey that started on his first day of kindergarten last week.

It wasn’t last week? It was 13 years ago? It seems like last week. I picked him up after school and he sat in the back seat of the car sipping a juice box while we talked about his day. I have a video of it.

There are three schools in California that you could plausibly go to ahead of USC: Stanford, Cal Tech — two small, private schools with ultra-low admit rates — and Cal.

Cal has a better academic reputation than USC. USC has cranked up the academics over the last 20 years, and especially over the last 10 years, to the point where if you compare the academic numbers for incoming freshmen, Cal no longer has the advantage — but reputations die hard.

I’m happy that the boy is going to Cal.

I’m happy about how happy he is to be going to Cal.

I’m happy that some of his classmates are also going to Cal.

I’m sad that he’s going to be leaving.