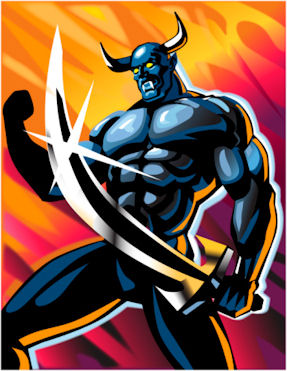 My co-author Paul Epps, one of his colleagues at the office thinks the Osama bin Laden death was a hoax.

This same fool believes that the new electric meter at his house is giving him brain cancer based on no evidence at all, but when the president of the United States says bin Laden is dead, he’s like Where are the pictures?!

HAAAHAHAHA! People are so gullible — thank God! HAHA! I said thank God, get it? I’m Satan!

But seriously, I just want to reassure you idiots that Osama is really here. It’s a tough adjustment for him. Some people know damn well ahead of time that they’re going to hell, so it’s an easier transition.

But Osama! Oh man was he surprised to see me! I wish you could have seen the look on his face! HAHA! What a Kodak moment! Gosh, I’m really dating myself with that Kodak reference . . .

By the way, how about those NBA playoffs? A lot of upsets going on, right?

My favorite team is the Miami Heat. I love the Heat! HAAAHAHAHA!

That’s the other thing Osama’s having trouble getting used to. You might think, well, he lived in a desert, he’s used to heat. No. It’s not the same — AT ALL! You’ll see what I mean when you get here.

So to summarize: Osama’s really dead and GO HEAT!