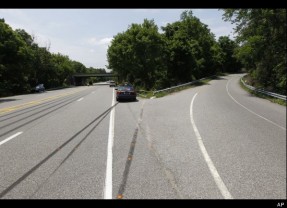 To anyone who misses Ryan Dunn, may I suggest that you honor his memory by getting drunk and driving your car into a tree.

The tragedy here is that Bam Margera wasn’t in the car with him.

I object to having these guys introduced into my life via front-page headlines. Why is Ryan Dunn’s death more noteworthy than any other moron with a fast car and a drinking problem? Because he shoved a toy car up his ass?

Here in our neighborhood in Irvine, we had a drunk guy a few weeks ago run a red light at Irvine and Culver and smash his truck into a car containing a father, his 14-year-old daughter and three of her friends on their way home from a birthday party.

One of the girls, a freshman at Northwood High School, was killed.

The fact that Ryan Dunn killed himself and a 30-year-old man rather than a 14-year-old girl is just a matter of chance.

If your idea of a good time is to go out drinking, then get in your car and drive around real fast on PUBLIC ROADS, then you are lethally stupid and I don’t like you.