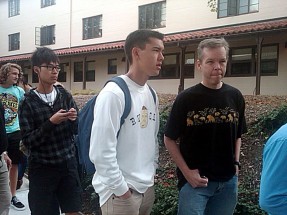 It’s Sunday night. We moved the boy in yesterday, had dinner with him tonight, and tomorrow morning, we’re going home without him.

I’ve had some emotional ups and downs this weekend as I cross the gulf between youth and old age. I almost cried five or six times.

I feel great about Berkeley. It’s a college town all the way. Men, women and children are decked out in Cal gear for miles around.

We live in Irvine, which also has a UC campus, but it’s not the same atmosphere at all. “That’s because no one wants to go to UC Irvine,” the boy said.

I feel good that he already knows some people. His best friend from high school is his dorm roommate. We met a couple of other high school classmates, one at a pizza place and one in the parking lot of the guest house. We met friends of friends, brothers and sisters of friends . . .

I feel good that the boy is not the same kind of mopey misfit that I was at his age. That’s really what I feel the best about. He’s polite and confident and his confidence rubs off on me that he’ll be able to handle things.

We dropped him off at the dorm tonight after dinner. I’ve been saying things to him for 18 years, and I couldn’t think of anything to say to him that I hadn’t already said.

I hugged him one last time and he went inside . . .

← Lasts
The Cheese Board →