The Father of the Year Competition is Heating Up 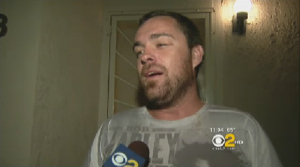 NEWPORT BEACH A man accused of becoming angered at his 7-year-old son and tossing him off a boat during a harbor cruise pleaded not guilty Monday to felony child endangerment.

Sloane Steven Briles, 35, of Irvine, is accused of being under the influence of alcohol and poking his son in the chest and repeatedly slapping him in the face before tossing him about 10 feet off the boat and into the path of oncoming boat traffic.

Prosecutors say he made no attempt to save his son and jumped off the boat only to avoid angry passengers on the Queen.

A boat had to maneuver to avoid striking the boy, who treaded water before a captain on another boat tossed him a life ring, according to prosecutors.

In interviews with television reporters following his arrest, Briles said he and his son were just playing around and that they both decided to jump into the harbor for fun.

← Is it Good Etiquette to Call Someone a Cocksucker?
Diversity Bake Sale Sparks Controversy →

She was a fool, and so am I, and so is anyone who thinks he sees what God is doing.