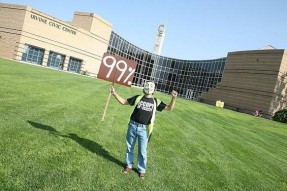 But I’m not clear on what constitutes a win with regard to the Top 1 Percent?

What if we take away everything they have and leave them with nothing? Then the Top 2 Percent roll up to become the Top 1 Percent and we’d have to stage another round of protests against them, right?

Why can’t we just count our blessings and enjoy what we have?

You think you’d be happier with a lot of money? You wouldn’t. Where’s the evidence?

As Epictetus used to say, “None of these objects that men admire and set their hearts on is of any use to those who get them, though those who have never chanced to have them get the impression, that if only these things were theirs their cup of blessings would be full, and then, when they get them, the sun scorches them and the sea tosses them no less, and they feel the same boredom and the same desire for what they have not got.”