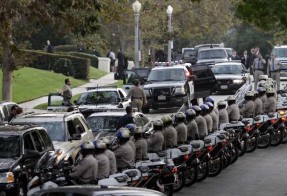 The White House wants you to see President Obama bash the rich, and everyone in the press corps is invited to cover the various rallies and speeches where he claims average people can’t get a break and the wealthy aren’t paying their fair share of taxes.

What the White House doesn’t want you to see is Obama schmoozing the rich so that he can pocket some of their money for his campaign.

So not surprisingly, news photographers were barred from both of Obama’s L.A. fundraisers Monday. . . .

Meanwhile, news photographers were welcomed earlier in the day when Obama made an unscheduled stop at Roscoe’s House of Chicken ‘n Waffles in West L.A., where he ordered the No. 9, “Country Boy” – 3 wings with choice of waffle, potato salad or French fries for $8.90.

← Unhappiness is Good for You
From the Notre Dame Photo Album →