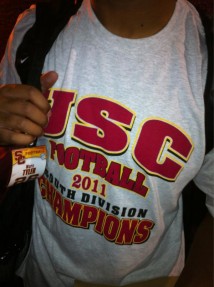 We have closed the gap more with SC. We got a chance to win a championship this week. That’s closing the gap. We haven’t had that chance in the past. We’ll see where the gap is after the ball game, but the gap is closed.

Tonight they were clearly the superior team. I don’t think that’s the case all the time. I believe we can close the gap, and we will. We weren’t good enough to play a marquee team like USC.

The gap was really close. You can tell by the score.

Maybe Neuheisel meant that the gap has been closed since 1929, when USC won the inaugural crosstown showdown 76-0.

Using any more recent date as a starting point for gap measurement, it looks wider than ever.

At 10-2, USC finishes with the best record in the Pac-12 Southern Division but because of NCAA sanctions isn’t eligible to play in the conference championship.