See You in Hell 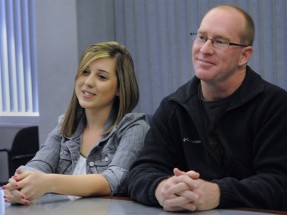 Modesto police are investigating if there’s a criminal case against a former high school teacher who resigned his job to move into an apartment with an 18-year-old girl he met while teaching.

James Hooker, 41, was placed on administrative leave Feb. 3 by Modesto City Schools and resigned less than three weeks later, according to a report at the Modesto Bee.

The newspaper reports that the man, who had taught business and computer classes, left his wife and children, to move in with Jordan Powers, an Enochs High School senior whom he met when she was a freshman at the school. One of Hooker’s children also attends the same high school.

“In making our choice, we’ve hurt a lot of people,” Hooker told the Bee. “We keep asking ourselves, ‘Do we make everyone else happy or do we follow our hearts?'”

Follow it right out the front door of the family home and into a Modesto apartment with a high school girl whose poor single mom, from the looks of the photo, couldn’t afford to buy her a set of braces.

And make yourselves available for interviews and photo ops. YES! YES! YES!

(Let me add parenthetically that, despite what you may have heard, being raised by a single parent does not screw kids up in the head and more people should be doing it.)

One of your own kids goes to the same high school as your new live-in girlfriend?! Oh, the collateral damage is going to be prodigious!

Wait — I’m now being informed that the two of you appeared on Good Morning America this morning?!

Brilliant move, Romeo! A sane person would have said, “No, I think I’ve done enough damage already,” let things play out as just a local scandal in the backwater of Modesto, and missed out on the opportunity to traumatize everyone involved at a national level.

If this doesn’t result in at least one suicide, then my name is not Satan.

See you in Hell, professor.