Residents and merchants here have grown weary of the Occupy Tampa movement’s 6-month presence in their midst, and some of them aim to take action.

On Thursday they plan to take a petition to the Tampa City Council. It maintains that the movement has turned a privately owned park on Main Street into an impromptu squatters’ village that is unsightly and, at times, unruly.

Since adult nightclub owner Joe Redner made his Voice of Freedom Park available to the movement in December, it has filled with pup tents, and has become an eyesore that is unclean, disorderly and unsafe due to people using drugs and drinking alcohol, the residents say.

What we have here, then, is a dispute between a rich man asserting his right to use his property in any way he sees fit and the residents of a lower- to lower-middle-class community who are suffering the externalities of his unregulated actions. The Occupy clowns, natch, are on the side of the rich guy.

— Best of the Web Today 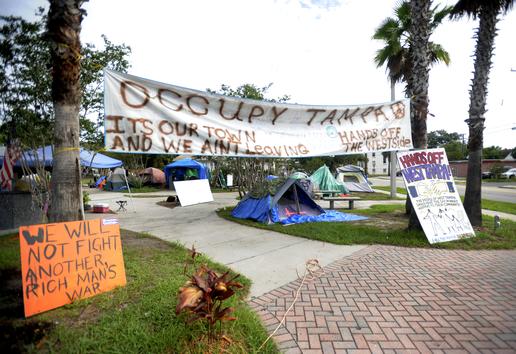