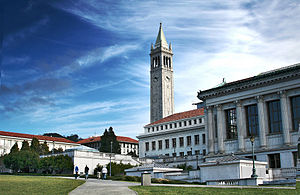 Saul Perlmutter, who just won the Nobel Prize in Physics, is teaching an undergraduate seminar on physics and music this year.

How many schools even have Nobel Laureates on the faculty? Of those that do, how many of them teach small classes for freshmen and sophomores?

Ivy League schools, with the exception of Harvard, are coasting on their reputations. When’s the last time you heard of an enterpreneur from Dartmouth or Brown or Yale?

Stanford is great in engineering and business but limited in other areas. Also, top professors at private schools would rather piss on a spark plug than traffic with undergrads.

That said, the University of Southern California football season starts Sept. 1 against Hawaii. The Men of Troy!

FIGHT ON FOR OLD ‘SC! OUR MEN FIGHT ON TO VICTORY!