Replacement Refs Are Just What the Sport Needs 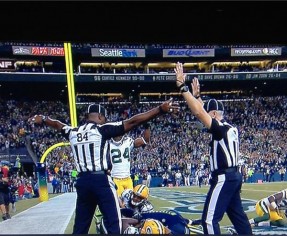 Sports fans are the biggest cretins on the planet. When their team wins, they gloat, usually in the first person: We won! We beat those guys!

There are no bigger mental and emotional retards than people who refer to sports teams in the first person. It’s an inability to separate fantasy from reality. (Imagine a Roger Federer fan screaming, “I just won Wimbledon!”

When ther team loses, they blame it on one of two things: 1) Bad coaching; 2) Bad officiating.

Replacement refs play right into #2. It’s perfect. Every jackass fan now has a built-in excuse as to why his team lost.

The NFL will be more popular than ever.

← Tips for Effective Visualizations
The (Limited) Importance of Success →

4 comments for “Replacement Refs Are Just What the Sport Needs”

Whatever you’re meant to do, do it now. The conditions are always impossible.