Rough Layouts Sell the Idea Better Than Polished Ones

This was written by an ad man but I can see it applying to other endeavors, like designing a software interface: 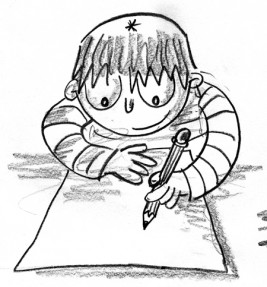 If you show a client a highly polished computer layout, he will probably reject it.

It is a fait accompli.

There is nothing for him to do. It’s not his work, it’s your work. He doesn’t feel involved.

If he doesn’t like the face of the girl in your rendering, or the style of the trousers on the man on the right, or the choice of the car he’s driving, he’s going to reject it.

He won’t see the big idea. He will look at the girl’s face and think, ‘I don’t like her, this doesn’t feel right.’

It is very difficult for him to imagine anything else if what you show him has such detail.

Show the client a scribble.

Explain it to him, talk him through it, let him use his imagination.

Because you haven’t shown the exact way it’s going to be, there’s scope to interpret it and develop and change it as you progress.

Work with him rather than confronting him with your idea.

There is one bright spot at the back, at the beginning of life, and afterwards all becomes blacker and blacker and proceeds more rapidly—in inverse ratio to the square of the distance from death.