EUREKA, Calif. (AP) — A couple died and their 16-year-old son went missing after being swept into sea in Northern California while trying to save their dog, authorities said Sunday.

The family was at Big Lagoon, a beach north of Eureka, Saturday afternoon when the dog chased after a thrown stick and got pulled into the ocean by eight to ten foot waves, said Dana Jones, a state Parks and Recreation district superintendent.

— Couple swept to sea in effort to save son, dog – Yahoo! News 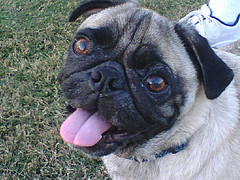 Folks: Don’t throw sticks into 10-foot waves. I’m not a stick-chasing kind of dog myself, but some dogs, like retrievers, are just born to fetch things. They can’t help it.

So it’s up to you, the owner, not to throw something where it’s not safe for the dog to be.

Another thing: the dog in this case actually made it out of the ocean by himself!

Dogs know how to swim — just keep your head up and paddle! Humans sometimes will panic or give up but a dog will keep trying and not give up.