The first headline I saw this morning was Obama Victory Speech Urges Unity in Facing Challenges.

In case you haven’t seen it, here’s an ad run by President Obama in Ohio in the closing days of the campaign: 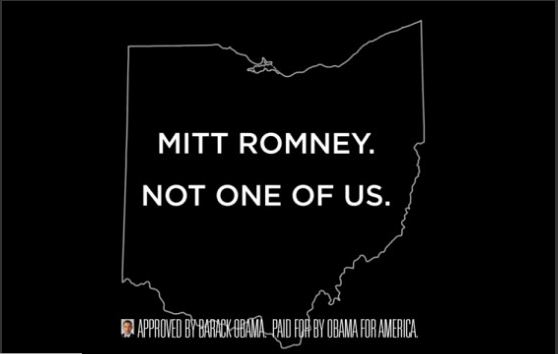 A few days ago, it was Us vs. Them, whoever you imagine Us and Them to be. Now it’s Obama Urges Unity.

“Not one of us” is an ugly sentiment in itself, but coming from a man who not long ago promised us Hope and Change and Inclusiveness, it betrays a complete absence of character.

Four years ago, I said what I thought I needed to say to get elected, and I’m doing the same thing now, even though what I’m saying now is the exact opposite of what I said then.

Obama has been nothing if not divisive. On class and income, he speaks contemptuously of “millionaires” and glowingly of “spreading the wealth around.”

Obamacare, his signature “accomplishment,” allows — encourages, in fact — free riders to take advantage of others who’ll be forced to pay double and triple fares.

On race, he gratuitously inserts himself into cases involving black victims — Henry Louis Gates, Trayvon Martin, who “would look like my son if I had one.”

In cases where black boys beat a white man almost to death because they were bored, or black boys killed a white girl for bike parts, he has nothing to say — nothing about hate crimes, social disintegration or the resemblance of the perpetrators to his own hypothetical offspring.

Now that the election is over and won, he takes a few minutes for the obligatory call for unity before another four years of division.

I, for one, am tired of the bullshit.