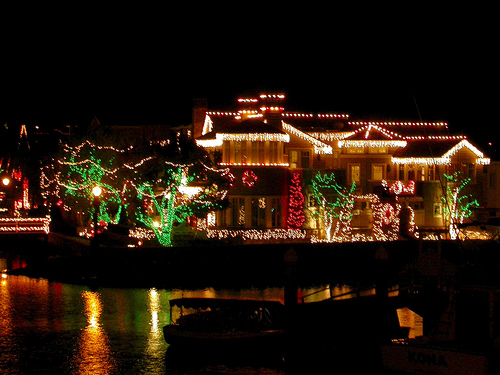 We took a boat tour of Newport Harbor last week to see Christmas lights on the bayfront homes and yachts . . .

In the early 20th century, lots in Newport Harbor were selling for $75. Amenities such as electricity, paved streets, sewers, streetlights and water were lacking and roads to the area were largely undeveloped. Basically, you were buying the right to live on a mud flat at a three-hour drive from civilization, so even at $75, sales were slow.

The sellers then placed a coupon offer in Sunset magazine: buy a two-year subscription to Sunset and get $25 off the price of a lot. So — $50 instead of $75.

I wish someone in my family tree had had the foresight to buy one because you couldn’t get a bayfront lot today for less than about $10 million. Not a house — that’s just for the lot.

In spite of everything, I still believe that people are really good at heart.