You Say Anarchy, Sir, Like It’s a Bad Thing

Frankly, one of our political parties is insane, and we all know which one it is. They have descended from the realm of reasonableness that was the mark of conservatism. They dream of anarchy, of ending government.

I’ll tell you who’s insane: anyone who’s not dreaming of anarchy at this moment in history is insane. People forget that this great nation was founded by anarchists, born out of an armed revolution against a corrupt government.

As I said at the time, “Whenever any Form of Government becomes destructive, it is the Right of the People to alter or to abolish it.”

I assure you, though, that regrettably neither current political party dreams of anarchy. They both dream of exactly the same things: self-aggrandizement and rewarding their most powerful supporters with political spoils. 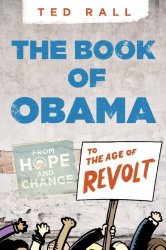 The well-known liberal cartoonist Ted Rall wrote a book a couple of years ago advocating a new American revolution. Unfortunately, while popular uprisings do continue to occur around the world, I am not optimistic that it will ever happen again in America.

The great majority of our citizens now are far more informed about fantasy football and reality TV than they are about current events. They understand politics at only the most simple-minded level: Team Red vs. Team Blue.

Notice, for example, that all of the things that Team Blue hated so much about the George W. Bush administration are okay now that they’re being carried out by President Obama.

Obama didn’t stop the wars or the torture or the spying. He’s just as cozy with Wall Street. Gitmo is still open for “prolonged detention.” Moreover, he’s killing foreign civilians, and sometimes American citizens, with drone strikes, and he’s eliminating whatever civil liberties you think you have left.

Torture and war and economic collapse don’t matter as long as they’re being supervised by my team! Go Blue! We’ll all be in a gulag in 10 years. Go Blue!

Some despotic regimes around the world rely on starvation and threats of violence to keep the people in a state of submissive compliance. Here in America, the same collective stupor is effected via mindless entertainments and gadgetry.

I should raise myself out of depression, paralysis and failure and resist this massive government/corporate dystopia — but I might miss my TV programs.

In 1776, we decided that being Americans meant being free men and women, not serfs and lackeys. We mutually pledged to each other our Lives, our Fortunes and our sacred Honor to throw off the abuses and usurpations of the Government, and to secure the blessings of Liberty.

How soon they forget.

I bid you God speed,

← Dogged by Protesters
A Glutton for Punishment →