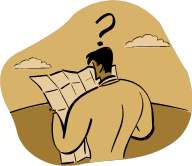 The latest update of the Pew Research Center’s News IQ quiz finds that while 79 percent of respondents correctly identified the Twitter logo, only 55 percent could identify Eric Holder as U.S. Attorney General.

The Holder question was not an open-ended question, which would have been more difficult, e.g., “Name the current U.S. Attorney General” or “Who is Eric Holder?” It was a multiple-choice question. The question (you can take the quiz yourself here) shows a photo of Holder and asks respondents to select his job from a list of four options.

Results were even worse for other questions. Fifty percent correctly identified Syria as the highlighted country on a map, again from a list of four choices, and 43 percent were able to identify Elizabeth Warren from a set of four photos.

And still there are some misfits who continue to insist that voter suppression is a bad thing.

← Doing What He Loved
Rearview Cameras in Cars →

Tell them I had a great life.

— Wittgenstein, on his deathbed