Marilyn Monroe Was a Size 12 and Einstein Was a Moron

I saw this photo today on Facebook with a comment added by the poster: “She was a size 12.” 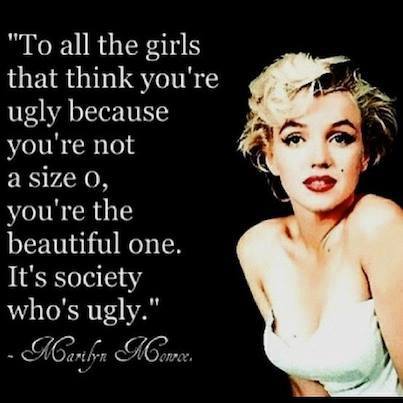 I’m an empiricist. Maybe “empiricist” is a polite word for what I am. I hate things that don’t make sense.

Marilyn Monroe being a size 12 is one of those bits of misinformation that lives forever because a lot of people would like for it to be true. And yet, anyone who’s ever seen Marilyn Monroe — her full figure — in a movie or photo would notice that she had a very small waist and was obviously NOT a size 12.

So I commented that while Marilyn’s point is well taken, on her worst day she was not a size 12.

The original poster replied, “Of course none of this is verifiable at this point, but your comment does not help empower those who are inspired by this ‘fact,’ no matter how true it is. Point is, girls/women who don’t fit the unrealistic supermodel form need to have something to reinforce a more realistic view of women, and of success. By unnecessarily giving your “correction” about how there is NO WAY someone that hot could be a 12, you are in essence proving my point about how, to men, dress size determines desirability. Such men, as the oppressors and the ones who, undeservedly, create the social values that drive our society, need to be met with some strong and intelligent women who challenge their definition and labeling of women.”

We can feel better about ourselves without actually losing weight or getting in shape if men would just let us pretend that Marilyn Monroe was a size 12.

Look: if you want to be with guys who like thin girls, then you need to be thin. Otherwise, stop worrying about Marilyn Monroe’s dress size and what other people think about the way you look. And stop blaming men for your problems in life as though “men” is an actual group of people who’ve all agreed to think and act the same way.

In other empowering news, Albert Einstein actually had an IQ of 68. He was a total fucking moron! It’s empowering so it doesn’t have to be true.

P.S. Jessica Siegel (size 12) has posted photos of herself trying to fit into some of Marilyn’s frocks.