EppsNet at the Movies: The Monuments Men 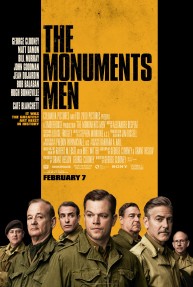 This movie is getting killed on Rotten Tomatoes — 34 percent as I write this. Granted, it’s not in 3-D, doesn’t have robots or aliens or other really fake-looking bullshit, and despite being set during World War II, has only a minimal amount of violent action.

(If you like that kind of thing, fear not! We were shown previews for Pompeii, Spiderman, X-Men, some Tom Cruise sci-fi thing . . . rest assured there’s plenty of crap in the pipeline.)

The Monuments Men tells an interesting story in an entertaining way, with memorable scenes and characters, and the best female role I’ve seen in a movie since Come Back, Little Sheba.

The Monuments Men An unlikely World War II platoon is tasked to rescue art masterpieces from Nazi thieves and return them to their owners.

Well, George Lewis told the Englishman, the Italian and the Jew / “You can’t open your mind, boys / To every conceivable point of view”