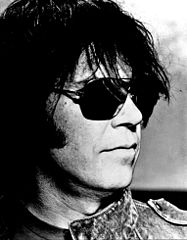 Neil Young is playing a couple of solo acoustic shows next month at the Dolby Theatre. Tickets went on sale Monday morning, but somehow I missed the fact that they’d been available via “pre-sale” since last Friday and were all gone by Monday morning.

What a heartbreaker. Fortunately, thanks to the wonders of technology and social networks, Mr. Young and his team were able to inform me via Facebook that a third show had been added and I was able to log in and get tickets for that one.

The sold-out shows are on a Saturday and Sunday. The new show is on a Tuesday. Am I looking forward to driving in to LA and back on a Tuesday? No, but on a list of solo acoustic shows for which I’d be most willing to knock over my own mother to get a ticket, Neil Young would be second, behind Bob Dylan.

Unlike some singer-songwriters, Young also has a distinctive style and talent as a musician, plus an almost-50-year portfolio of great songs — not clever lyrics or inventive melodies, but a Neil Young song is as real as the day is long. They get a hold of you, like a meathook.

A solo acoustic performance is like he comes over to your house and picks up a guitar. Can you imagine that? Neil Young is at my house and he just picked up a guitar. “Do you mind?” he asks.

One more thought on Bob Dylan: Solo acoustic Bob Dylan is part of the iconography of America in the 1960s. I don’t expect Bob Dylan to ever do a solo acoustic show again but if he did, the significance of it I think would be second only to Jimi Hendrix playing a concert after coming back from the dead.

← A Trip to the Vet
Overheard at Subway →

I try not to be as hard on myself as I am on other people.