Spa Day at the Vet and Erica’s Departure

I dropped Lightning off at the vet for grooming . . .

“Make it like a spa day for him,” I said. “With lots of pampering. Don’t just put him in the sink and soak him down like we do at home. Make it free pampering though, nothing that will cause extra charges to accrue. By the way, where’s Erica?”

Erica is usually at the desk on weekends but today there was a new girl. The new girl, Lauren, said that Erica is moving to Arizona and won’t be working there anymore.

“She will be greatly missed,” Lauren said.

She sure will. People are insane when it comes to their pets and Erica was always extremely patient and attentive — extremely.

I wish I had the kind of personality that makes people miss me when I go away but oh well . . . I guess I have other qualities. Everyone’s different. 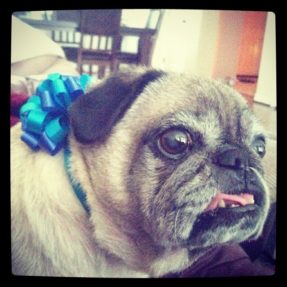 Later, when I picked Lightning up, they’d put a bow around his neck, which is a new thing. Usually they don’t decorate the dog.

← On the Evaluation of One-Sided Evidence
EppsNet Book Reviews: My Antonia by Willa Cather →

Before you diagnose yourself with depression or low self-esteem, first make sure you are not just surrounded by assholes.