In reporting on yesterday’s Supreme Court decision to uphold a Michigan ban on the use of racial preferences in admissions to public universities, the New York Times looks at results in other states that have banned racial preferences.

Here’s what the Times says about my state, California, which voted to ban racial preferences in UC admissions in 1998: 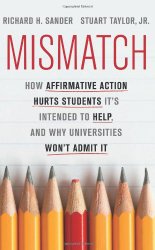 That is a misleading analysis for a couple of reasons:

Among other campuses, black and Hispanic enrollment was

There’s been a redistribution of black and Hispanic students, but not a sharp drop in enrollment.

The number of black and Hispanic students graduating from UC schools

UCLA and (especially) Berkeley are elite universities. Black and Hispanic students who were admitted based on genetics rather than academic qualifications couldn’t compete at that level and had to drop out.

Who was helped? The dropouts? No. The qualified applicants who were passed over? No. It was a lose-lose scenario.

Now that students are admitted, regardless of race, to schools that they’re academically qualified to attend, graduation rates are much higher.

Always look askance at analysis of college admission policies in the absence of information on graduation rates.