If There’s One Thing I Can’t Tolerate, It’s Intolerance 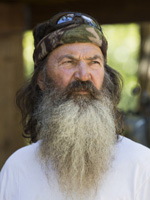 His comments are included in a sermon delivered at his church in West Monroe, Louisiana, on Easter Sunday. Robertson includes homosexuals with other groups such as thieves and adulterers as hell-bound sinners.

Oooh, new anti-gay remarks. I’m trying to get appropriately offended about this but I can’t do it:

There are two ways to slide easily through life: to believe everything or to doubt everything. Both ways save us from thinking.