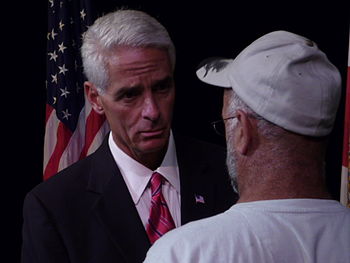 Charlie Crist, former Republican and currently Democratic candidate for governor in Florida, on why he changed parties:

I couldn’t be consistent with myself and my core beliefs, and stay with a party that was so unfriendly toward the African-American president. I’ll just go there. I was a Republican and I saw the activists and what they were doing, it was intolerable to me.

It was so intolerable that Crist left the GOP in 2010 — four years ago — and he’s just bringing this up now?

Is he really this stupid or is he counting on his target audience being this stupid? I suspect the latter . . .

The longer I live, the more uninformed I feel. Only the young have an explanation for everything.