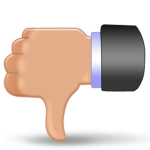 A woman on Facebook a couple of days ago asked everyone to pray for her seriously ill father. Today, he died. Go figure.

Had he made a miraculous recovery, we would have said that prayer “worked” . . . but what does it mean when you pray for someone to live and he dies?

Maybe God operates on the same principle. When you put someone’s fate in his hands, he retains the option of saying “toodle-oo.”