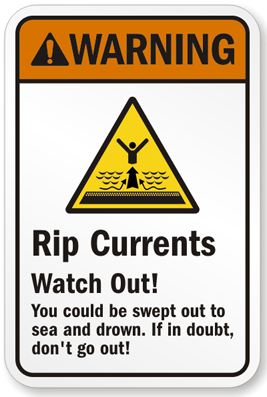 The worst thing you can do to people, aside from physical injury, is give them the idea to blame their failures on vague impersonal forces or the actions of anybody but themselves. It doesn’t promote success or happiness. I don’t know any happy people who think like that.

For example, I read this in a New York Times article about an impoverished area of West Virginia:

John got caught up in the dark undertow of drugs that defines life for so many here in McDowell County.

That is just awful. I live in Southern California, not too far from the ocean . . . I’m familiar with undertows (although I’ve never heard of a “dark” undertow). First of all, sorry to be pedantic but undertows aren’t dangerous . . . they’re just after-effects of individual waves. What’s dangerous is a riptide . . . a concentrated flow of water that can jet you offshore in a matter of seconds.

Maybe John got caught in a riptide of drugs.

Some beaches post signs warning swimmers of riptides on high-risk days, but in general, getting caught in a riptide is an unfortunate but unavoidable event. Drug abuse is optional. It’s a decision you make about your life.

(I’m assuming here that no one sticks a funnel in your mouth and pours drugs into it against your will . . .)

We live in a fallen universe. We can at least be kind to one another and not jump on one another’s slightest errors or moods. In a desperate situation, pick your battles.