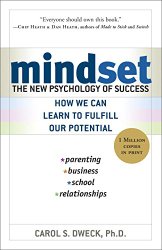 Carol Dweck’s research is part of a tradition in psychology that shows the power of people’s beliefs. These may be beliefs that we’re aware of or unaware of but they strongly affect what we want and whether we succeed in getting it. This tradition also shows how changing people’s beliefs can have profound effects.

Dweck’s insight into fixed mindset (bad) vs. growth mindset (good) is powerful but there’s really not enough to it to sustain a book-length exposition without a lot of repetition and illustrational anecdotes, the problem with which is 1) they tend to be overly simple tales of triumph and failure with clearly identified causes; and 2) they ignore the inevitability of regression.

For example, two of the people Dweck identifies as exemplars of the growth mindset are Tiger Woods and Alex Rodriguez. Mindset was published in 2006, after which Woods’s career imploded in the wake of extramarital affairs with 100 or so women, and Rodriguez was suspended from baseball for cheating.

Among the companies singled out as possessing a growth mindset is Circuit City, which announced in January 2009 that it was going out of business.

Don’t get me wrong here, I think Dweck’s work is insightful and illuminating, I just don’t think it works well as a book. For a shorter introduction, try, for example, “The Secret to Raising Smart Kids,” recently published in Scientific American.

← Kidneys for Coders
Lover of Life, Singer of Songs →