Parents Use “Naturopathic” Remedies to Treat Toddler, Who Dies

A southern Alberta couple accused of allowing their meningitis-infected toddler to die four years ago tried home remedies such as olive leaf extract and whey protein rather than take him to a doctor, a Lethbridge jury heard Monday.

David Stephan, 32, and his wife Collet Stephan, 35, have pleaded not guilty to failing to provide the necessaries of life for 19-month-old Ezekiel, who died in March 2012. 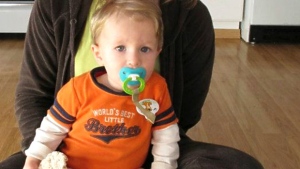 First point: If the name “Ezekiel” shows up on a birth certificate, alert the local authorities to be on the lookout for additional crazy behavior in the future.

In a bid to boost his immune system, the couple gave the boy — who was lethargic and becoming stiff — various home remedies, such as water with maple syrup, juice with frozen berries and finally a mixture of apple cider vinegar, horse radish root, hot peppers, mashed onion, garlic and ginger root as his condition deteriorated.

The family has posted on social media that they feel they are being unfairly persecuted and that their approach to health should be respected.

If your son dies because you refused to take him to a doctor even though you knew he was sick, then I’d say that any persecution of you is both fair and appropriate.

Remember folks, there’s not such thing as “alternative” medicine. There’s “medicine” and there’s “things that have not been proven to work,” like curing meningitis with maple syrup.

2 comments for “Parents Use “Naturopathic” Remedies to Treat Toddler, Who Dies”