George Orwell: “I Told You So” 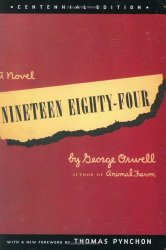 WASHINGTON (AP) — An Associated Press review of the official calendar Hillary Clinton kept as secretary of state identified at least 75 meetings with longtime political donors, Clinton Foundation contributors and corporate and other outside interests that were not recorded or omitted the names of those she met.

Clinton campaign spokesman Nick Merrill said that Clinton “has always made an effort to be transparent since entering public life.”

In addition to the unrecorded meetings with donors, this effort at transparency includes setting up a private email server to use as Secretary of State, and giving speeches at $200,000 per to Wall Street banks and investment firms, foreign governments and other special interest groups under a contract that prevents anyone from releasing a transcript of what she said.

Merrill went on to say, “War is peace. Freedom is slavery. Ignorance is strength.”

But what do I get from existence? If it is full I have only distress, if empty only boredom. How can you offer me so poor a reward for so much labor?