I saw this headline on an AP story today — Poor and disabled big losers in Trump budget.

The story includes a photo of the budget (see below), so I think it’s safe to say that the AP writer didn’t read the entire thing before announcing who the “big losers” are. He’s just flogging his own agenda. (See also Harvard Study Says Media Are Very Biased Against Donald Trump) 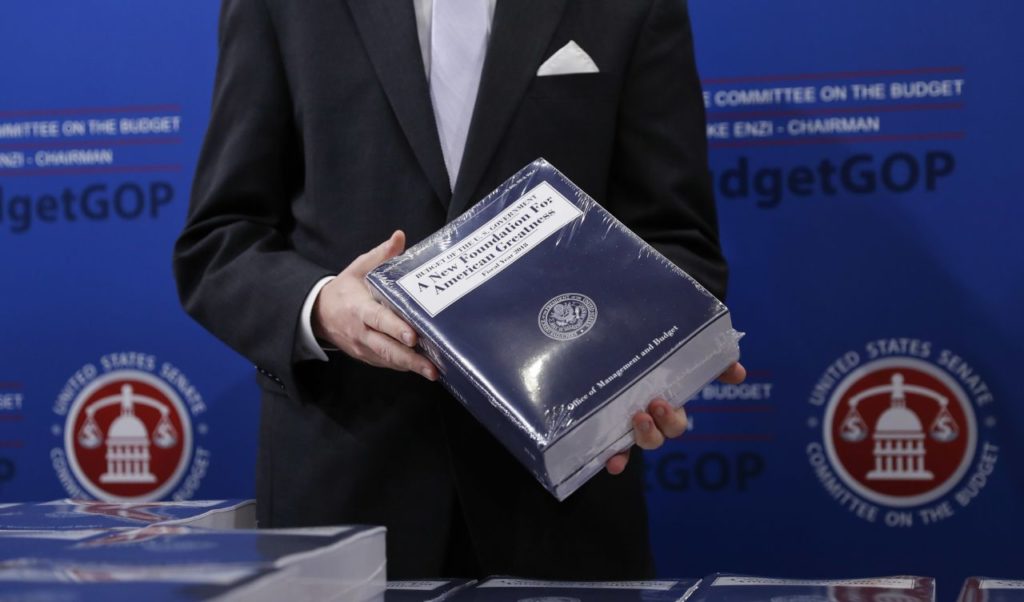 What’s the difference between a “cut” and a “deep cut”? The latter sounds mean and scary. Why not just say something factual like “10 percent cut” or “50 percent cut” and let readers put their own characterization on it?

“Trump’s budget would cut the food stamp program by $191 billion over the next decade.” OK, there’s a factual assertion. But the government doesn’t use zero-based budgeting, in which each year’s budget starts at zero and all expenses must be justified for each new period. Government budgeting calls for incremental increases over previous budgets.

For example, if the cost of Program X is budgeted to increase 10 percent per year, and we “cut” it by 5 percent, the cost still goes up 5 percent. We can have budget cuts and more spending at the same time.

So “Trump’s budget would cut the food stamp program by $191 billion over the next decade” actually means something like — I don’t know the actual numbers, but something like “The cost of the food stamp program would have gone up by $800 billion over the next decade but because of the $191 billion ‘cut,’ it will only go up by $609 billion.”

Also — numbers in a federal budget look really big because the US is a big country with a lot of people — 320 million. If you wanted to give every person in the country 5 dollars, you’d need to have more than $1.5 billion on hand to do it.

Food stamp costs of $191 billion over a decade comes to $19 billion per year. How many people receive food stamps? About 45 million. So $191 billion is only about $400 per person per year.

I could be wrong but I don’t think Elizabeth Warren or fans of Elizabeth Warren really care about people on food stamps, at least not enough to help out of their own pockets. I think they care about having the power to deem things worthy and then make other people pay for them.

Elizabeth Warren didn’t say “I am personally contributing $400 per year and I want all of you who are as outraged about this as I am to contribute $400 per year to make up the difference in the food stamp budget.” What would happen if she did?

Just because I exist on the very edge of society doesn’t mean I can’t enjoy a half soy, half skim latte now and then.