News networks have been running a two-week-long (with no end in sight) infomercial on white supremacists and white nationalists and neo-Nazis as though they represent a powerful force that has to be reckoned with, a vast army of domestic terrorists, which they don’t. 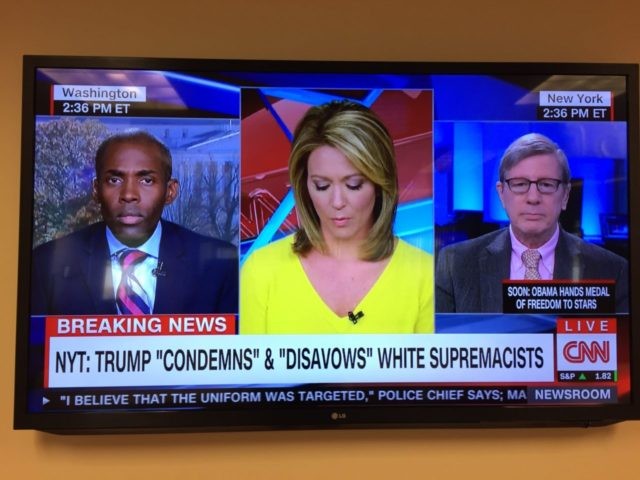 The most important thing to know about white supremacists and neo-Nazis is that there are actually not very many of them.

The leading white supremacist organization is the Ku Klux Klan. How many members do you think the KKK currently has? Take a guess. Keep in mind we live in a country of more than 320 million people.

Estimates of current KKK membership run between 5,000 and 8,000 members. Is that less than you thought?

According to the Times, the National Socialist Movement has about 400 members.

“White supremacy: Are US right-wing groups on the rise?,” published this week by BBC News, suggests that roughly 10,000 Americans might qualify as active white supremacists.

They mention “groups like the NSM” as being active in 32 states, without mentioning that the groups are very small. Describing a small, poorly organized number of people as being “active in 32 states” sounds a lot scarier than saying “about 400 members.”

A collection of 10,000 people represents less than .01 percent of the US population. If you want to flip it around, you could say that 99.99 percent of us are not white supremacists.

How did such a small, loosely connected group of people manage to capture such a large national mindset?

President Trump was portrayed by opponents during the 2016 campaign as the second coming of Hitler. His supporters were portrayed as white supremacists and Nazis.

After he was elected and the concentration camps failed to materialize as predicted, Trump opponents were still on the lookout for opportunities to resurrect the Nazi theme.

The only way a “Trump is courting the white supremacist vote” theory makes sense is if you don’t know what the actual numbers are.

If you do know what the numbers are — about 10,000 people — it becomes mathematically ridiculous. No one wants or needs the support or endorsement of white supremacists at the cost of pissing off the other 99.99% of America. No one is saying “I’ve got to capture the Nazi vote — all 400 of them.”

My guess is that most media people, who according to Harvard University are very biased against Donald Trump, don’t know or care what the white supremacist numbers are. They just push their narrative and follow the crowd.

But there must be at least a few who do know what the numbers are and are just yanking our chains.

← Pug Photos on Flickr
Some Things You Never Get Used To →