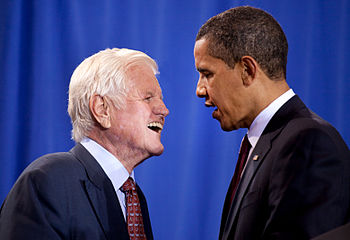 I’m old enough to remember when a U.S. senator could actually kill a woman and not only NOT resign but be considered a legislative luminary, the lion of the Democratic party.

(If you’re not old enough to remember that, google “Ted Kennedy.”)

I’m hearing that Sen. Al Franken will be resigning his seat within the next day.

The last straw was an allegation from a woman who said that Franken, before he was a senator, appeared to be about to kiss her and she moved away:

He was between me and the door and he was coming at me to kiss me. It was very quick and I think my brain had to work really hard to be like ‘Wait, what is happening?’ But I knew whatever was happening was not right and I ducked. I was really startled by it and I just sort of booked it towards the door and he said, ‘It’s my right as an entertainer.’

Her brain “had to work really hard.”

Franken categorically denies the allegation but that hasn’t stopped an avalanche of senators from calling for his resignation, none of whom apparently have ever in their life tried to kiss someone who wasn’t interested.

Satan and Ted Kennedy must be having a good laugh together. Those were the good old days, Ted. Pass the Jameson . . .

← A Visit to Stahl House
The Dust of Everyday Life →

We come to work, have lunch, and go home. We goose-step in and goose-step out, change our partners and wander all about, sashay around for a pat on the head, and promenade home till we all drop dead.