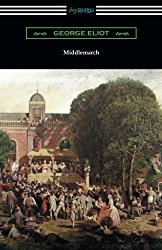 George Eliot is a transgender author whose work was previously unfamiliar to this reviewer.

What it is about? At 800+ pages, it’s about a lot of things: life in rural England in the 1830s, the status of women, the bonds of matrimony, idealism, self-interest, religion, hypocrisy and politics.

It’s about the heroism of ordinary lives.

It’s about, in the character of Dorothea Brooke, “the mixed result of young and noble impulse struggling amidst the conditions of an imperfect social state, in which great feelings will often take the aspect of error, and great faith the aspect of illusion.”

Here’s the conclusion of the novel, in which the narrator is looking back from several decades later at the main characters. Admittedly it loses some power out of context but you’ll get the idea. Googling the Cyrus reference might help.

(Mild spoiler alert, insofar as spoilers can exist for a well-known book from the 19th century.)

Sir James never ceased to regard Dorothea’s second marriage as a mistake; and indeed this remained the tradition concerning it in Middlemarch, where she was spoken of to a younger generation as a fine girl who married a sickly clergyman, old enough to be her father, and in little more than a year after his death gave up her estate to marry his cousin—young enough to have been his son, with no property, and not well-born. Those who had not seen anything of Dorothea usually observed that she could not have been “a nice woman,” else she would not have married either the one or the other.

Certainly those determining acts of her life were not ideally beautiful. . . . Her finely touched spirit had still its fine issues, though they were not widely visible. Her full nature, like that river of which Cyrus broke the strength, spent itself in channels which had no great name on the earth. But the effect of her being on those around her was incalculably diffusive: for the growing good of the world is partly dependent on unhistoric acts; and that things are not so ill with you and me as they might have been, is half owing to the number who lived faithfully a hidden life, and rest in unvisited tombs.

← Camille Paglia on #MeToo and Damsels in Distress
See You in Hell: Rifles Have an Undeservedly Bad Reputation →